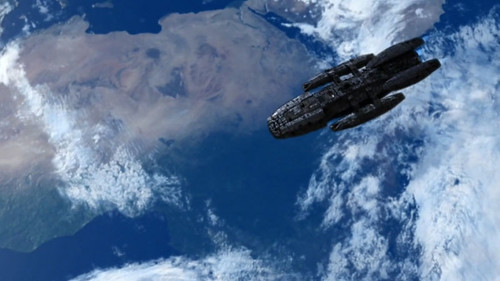 I waited a week to watch the BSG finale.  The idea being that since my best friend was coming down for the start of the F1 season we could watch it together.  Last weekend was kinda bad – I feel like I missed out a little on a chance to watch it with all the fans at once.  And as hard as I tried I did get spoiled a little – I knew that Lampkin was going to be President and I knew that Laura died in a Raptor flying over some planet.  That, uh, left a lot of stuff in between.

All in all I liked it.  No, it didn’t wrap everything up in a nice neat bow. Some fans aren’t happy if there isn’t a lot of pseudoscience in their science fiction.  Calling them “angels” and the particular force behind the scenes “God” (although supposedly “he doesn’t like that name”) may seem a cop out to some – but they don’t get that it was never about what exactly Kara was.  Or who/what “Chip Six” was.  It was about these people and their journey. It’s like the folks who read David Webber over Lois McMaster Bujold.
Bujold has 4 Best Novel Hugos, Webber has none.  Why is that?  It’s about the characters, stupid.

And I don’t understand what the folks are upset about?  You had a full hour+ of awesome military sci-fi.  Epic battle.  Guns.  Robots.  I mean what the hell did you people want?  I suppose they may have wanted more of a “Ship of Lights” thing – you know, you can’t actually have beings who have evolved into Gods but don’t need a magic spaceship…

The coda (in Vancouver/NYC), though – that part I didn’t really need.  It was cute, I suppose, but I could have done without it.    Then again, it’s not my show.  One thing, though – I wonder if the Star Trek franchise is kicking themselves right now?  They had this amazing storyteller working for them.  Just think what they could have had if they had let him off the leash?  Oh, that’s right – they could have had perhaps the finest SF TV show EVER.

One thing I gotta say is that I found was this thread on the official SciFi forums where Ron Moore (the creator/showrunner of BSG) answers fan’s questions through the intermediary of his wife.  It would seem his wife has been engaging fans during the seasons – the woman must be a saint.  Talking to SciFi types?  On the intartubez?  She’s crazy.  Clearly she needs to be informed of the Greater Internet Fuckwad Theory.  After the emotional rollercoaster of seeing such an amazing show end the last thing either of them need is to be doing is trying to talk to annoyed fanboys.