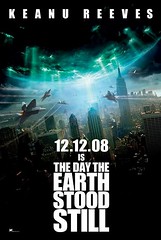 
I know I haven’t said anything about movies I’ve watched recently but…wow. This was really bad.

First off, I hated the kid. I was kinda hoping Bill/Neo/Klaatu would just off him. I hope that’s not like he is in real life or the Fresh Prince needs to start laying down the law. The thought of this kid and Jackie Chan in a Karate Kid remake is just repulsive.

Of course Jennifer Connelly’s character was at fault – the first time the kid got fresh she should have put the smack down. I think parents should be allowed to taser their children. Yeah yeah, she’s just a stepmom and dad’s dead….don’t care. The upside of his head – let me show it to you.

Secondly, the special effects were just meh. The nano cloud of death was ok, but a lot of the compositing was off. On Blu-Ray at least, at 1080p, you could see how out of place the helicopters looked. I just was never impressed. If the goal was to be a special effects masterpiece…it wasn’t. Weta has done better.

Thirdly there was Keanu. Ah, Keanu. What can one say? You should have stopped with Johnny Utah. Srsly.

Finally there was the “green” message. The aliens are here to kill us because we’re harming the earth. They, of course, had their own crisis and developed nanotech. They want to knock us back to the stone age. Hey, guys – I’d think a species that valued life would care about sapient beings and not want to wipe out six billion of them.

Oh well, movies like this are why I have Netflix. I will happily put this one back in the envelope and send it back from whence it came.