If you haven’t visited in a while you may have noticed that things look…different. Clearly, content creation hasn’t been a priority since, uh, 2013. (If you’re one of my compatriots from the WLAN professional community you very well may never have been here before.) In fact, at one point during some system maintenance I broken Movable Type so badly that I couldn’t even make a new post if I wanted to.

One of the interesting thing about the WLAN professional community is that blogging and social media participation is a thing that one does. And so if I want to be a participating member of this community (which I do) I needed to revive my blogging platform. I know it would have been easy to just pay WordPress for hosting, but I figured I’d see if I could get things set up myself. And not only did I repair my MT install enough to extract the older content, but I also got WordPress up and running just fine. Oh, and now running a supported version of FreeBSD which seemed like a good idea.

I’m fairly impressed by WordPress. This is a “stock” theme and it suits my personal design preferences quite well. It’s a pretty impressive tool, but I’m sure I’m doing this all wrong. But a learning experience never hurts.

Looking at that older content I’m not really sure if I want to keep it up or not. But I have done a few things to allow folks to narrow down what they look at:

So feel free to let me know what you think. We’ll see what happens as the situation evolves.

Endurolytes Caps
Serving size:  1 Cap, 5 caps/hr
Endurolytes Fizz
Serving size: 16 oz prepared, 1 24oz bottle/hr
The numbers are interesting.  The Endurolyte option is giving me less sodium but way more of everything else.  They have a detailed article telling me why they have their mix the way they do, but it’s interesting that their fizzy version mixes things up differently.  The one other variable is that the Skratch drink mix has 40 calories per serving, so that 1 bottle per hour would have 120 calories in it.
Then there is the issue of practicality.  This is something I have to carry with me – none of these options will be found at ALC rest stops.  Let’s say that I consume 1 bottle/hr minimum.  On my first century it took 7.5 hrs – I’m gonna round that up to 8 hours moving time for a long day.  The first two bottles of the day I could make at home (or in camp).  So that’s 6 bottles over the course of the rest of the day.  At 1.5 little envelopes per bottle that’s 9 envelopes of Skratch that I would have to carry with me.  If I “went safe” and doubled up on Nuun and/or Endurolytes Fizz it would be 12 tablets (or 1 tube).  It’s 40 caps of the regular Endurolytes which is fairly easy to carry in a small baggy.  The Skratch Labs option is the least practical for sure.
I also haven’t hydrated with anything that involves real calories.  I think I’m getting enough calories over the course of a ride but it’s uneven – I eat when stopped.  Perhaps there is value in getting some calories in on a regular basis.
I haven’t tried drinking nothing but Nuun for a day.  I know there are times where I’ve preferred the taste of water.  I also haven’t tried the Endurolytes Fizz at all.  I will be trying Skratch Labs on a short ride in the next day or two.  I have done a ride where I drank plain water and took 5 caps every hour (when the “moving time” clock on my Garmin said so).  That seemed to work ok, but like the un-even energy intake I wonder if it’s less than ideal.
I will say this – this all gets to be rather overwhelming, and it’s also rather individual.  I’ve got about 2 months to try the combinations and find what works best for me.  Hopefully I will be able to leverage the experience of others in addition to my own experiments.
One of the weird things about losing weight has been my feet.  When I started this I asked my podiatrist if my feet would shrink, and he said no.  I’d always be a “wide”.  Well, while I was getting a bike fit done a while back my fitter, the Cycling Goddess Vanessa, said “Hey, I don’t think your feet are wide.”  And she got me to try on the new Specialized S-Works shoe. Back then I didn’t think I was going to need new shoes, but boy were they comfy.  And they look cool, don’t they? 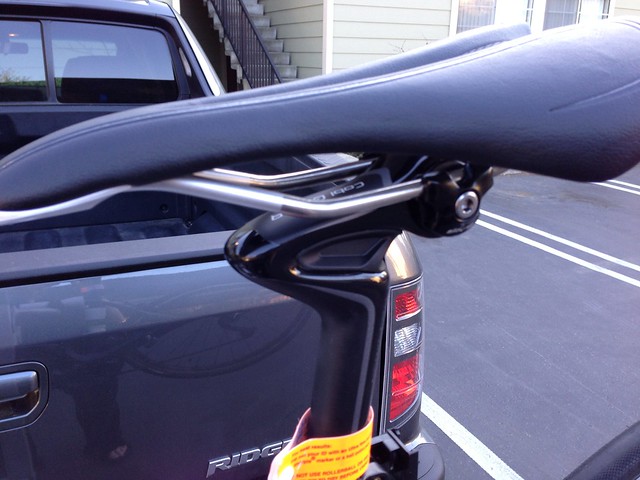